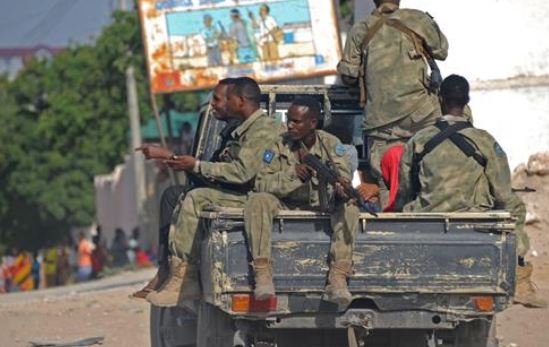 A powerful roadside bomb explosion has killed at least three Somali soldiers in the south of the African country.

The bomb, homemade, ripped through a military checkpoint in the southern port town of Kismayo on Thursday.

Abdulahi Ahmed Suldan, a local security official, confirmed that a senior military commander was among those killed in the fatal blast. « Three soldiers including a commander were killed, and seven others were wounded in the bomb explosion. »

Local residents said several of the wounded were civilians who were passing by the area when the bomb exploded.

The al-Shabab militant group has claimed responsibility for the deadly bombing.

The attack was the latest in a string of bombings targeting Somali government soldiers and foreign forces in the country.

In early September, at least 50 African Union soldiers were killed in an incident where al-Shabab militants stormed a military camp manned by soldiers from Uganda in the town of Janale, located in the region of Lower Shabelle in southern Somalia.

Violence in Burkina Faso, at least 27 dead
Written statement presented by the ADH at the 50th session of the Human Rights Council
Covid-19: 94% drop in deaths expected in 2022, a great success for Africa
70 migrants of different African and Asian nationalities dead or missing
Tags:
Previous Article
State of emergency declared: 23,000 displaced in California wildfires (video)
Next Article
Burkina Faso: Protests on streets ahead of curfew