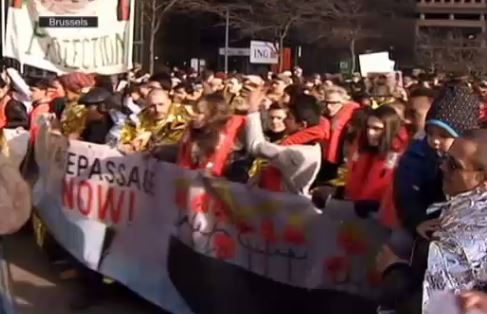 Friday, Slovenia, Croatia, Serbia and the former Yugoslavia, Republic of Macedonia have announced that they limited the number of people passing daily to North Europe to 580.

This figure is much below the daily flow of migrants in the territory.

This hardening and traffic conditions of refugees across Europe have led to several rallies on Saturday. Banners read: “European Union kills: no to migratory genocide,” and “No human being is illegal.”

The gatherings were part of a day of action across Europe on Saturday in solidarity with people fleeing the conflicts.

In Brussels, thousands of people wore the kind of foil thermal blankets given to arriving refugees with signs of hypothermia.

The crowd demanded an end to shutting down borders in favor of a decent welcom.

Violence in Burkina Faso, at least 27 dead
Written statement presented by the ADH at the 50th session of the Human Rights Council
Morocco: 18 migrants from sub-Saharan Africa have died
Majority of rich countries create deleterious and dangerous living conditions for children around th...
Tags:
Previous Article
Thousands of Russians into the streets to commemorate the assassination of opposition Boris Nemtsov (AFP)
Next Article
US: four wounded in shooting at Ohio high school