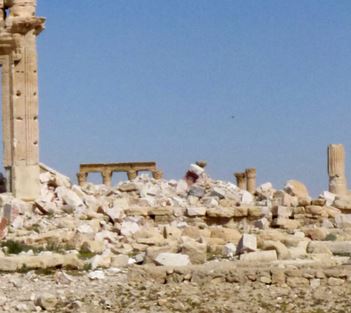 Palmyra, Syria, is another scar on a site martyred by terrorists. A few weeks ago, it was dynamited by the terrorist group of Daesh (ISIS) and the explosions disfigured it.

For Wail Hafian, director of antiquities in Homs « What Daesh did here is a crime, but these are just scratches on the face of this eternal beauty that is called Palmyra. »

The terrorists of Daesh (ISIS) exploded one of the most famous temples of the ancient city of Palmyra, Syria, a « war crime » and a « considerable loss » for Humanity, according to Unesco.

Hundreds of Syrian historic sites have been damaged, destroyed or looted during the conflict that began in 2011 and has become increasingly complex over the years, with government, rebels, terrorists and Kurds.