Syria: 126 deaths including 68 children in an attack

Syria: 126 deaths including 68 children in an attack 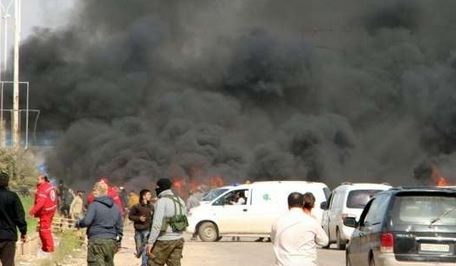 An operation to evacuate residents of besieged localities in Syria turned into carnage with the death of 126 people, in a suicide attack Saturday, one of the deadliest attacks in six years of war.According to the Syrian Observatory for Human Rights (OSDH), at least 68 children were among the 126 dead and the death toll remained high, with many people succumbing to their injuries.

Triggered in March 2011, the conflict has caused more than 320,000 deaths, millions of displaced persons and refugees and has become more complex with the involvement of international actors and jihadist groups.
The vast majority of the dead are inhabitants of Foua and Kafraya.The others are rebels who guarded the buses and aid workers.

A person dies of hunger in the world every four seconds
Burkina Faso: Eleven soldiers killed and about fifty civilians missing
Niger: Hunger strikes more and more families
Catastrophic situation of children victims of extreme drought in Africa
Tags:
Previous Article
Egypt: 44 dead and more than 120 wounded in two attacks claimed by ISIS
Next Article
Venezuela: Death, looting and hunger: chronicle of a night of riots in this country