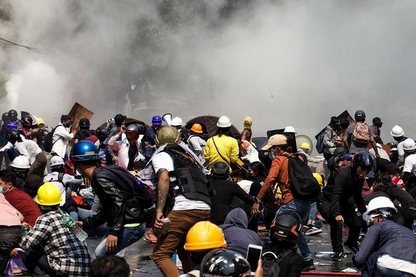 The UN on Sunday issued a warning about an increased risk of atrocities in Myanmar, after another day of bloody crackdown by the Burmese army.

Saturday was the bloodiest day since the protests against the coup began. Security forces killed at least 107 people and hundreds more were injured and detained in apparently coordinated attacks in more than 40 locations across the country.

This situation also endangers Myanmar’s already vulnerable ethnic and religious minorities, including the Rohingya. This population has long suffered horrific violence at the hands of the Burmese army with impunity, as evidenced by the Independent Fact-Finding Mission on Myanmar established by the Human Rights Council of the United Nations.

The Human Rights Agency calls on the Burmese army to immediately stop killing those they have a duty to serve and protect. HRA strongly condemns the murderous and systematic attacks by the military on peaceful protesters, as well as other serious human rights violations.

Burma, the largest state in mainland Southeast Asia, has experienced a series of military dictatorships since 1962.

The Francophonie and Human Rights as it celebrates its fiftieth anniversary
Environmental Impact of Armed Conflict
The Importance and Contribution of Citizen Journalism across Africa
By 2050, nearly half of children living in Africa and Asia will be continuously exposed to extremely...
Tags:
Previous Article
Education and Social Empowerment Toward Economic Independence and Poverty Reduction in Africa
Next Article
COVID-19 Vaccination and Inequality in Africa