Tensions in Algeria-France Relations and the Possible Consequences

Tensions in Algeria-France Relations and the Possible Consequences 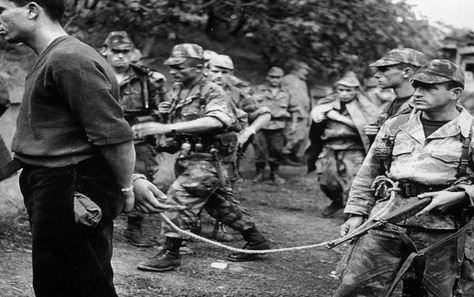 Relations between Algeria and France have been usually turbulent, with disagreements mainly rooted on their shared past, leading to more tensions and requiring serious attention to be resolved. The continuation of these tensions could have serious consequences for Africa in general and neighboring countries in particular.

During 60 years after Algerian independence from its previous colonial power, France, the country has gone through different crises, which have been particularly fueled by domestic politics. The first forty years went well, but the tensions then started . These tensions worsen as Algerians continue to detest France for occupying their country. Algeria’s history represents a bloody fate in North Africa that has endangered and taken millions of lives in Algeria and other countries over the years . The people of Algeria remember their past in the struggle against colonialism for freedom and independence, for which they paid a heavy price, including looting, killings, torture, and imprisonment . Although France claims that it seeks to restore peace, many Algerians are skeptical and unconvinced. It seems that this situation has only led to more ambiguity and confusion for the people of Algeria.

Another reason that has intensified the tensions between the relations of the two countries is the diversification of the Algerian foreign policies and developing its relations with different powers of the world, including China and Turkey. This becomes more concerning for France as Algeria has established strong strategic and military relations with Russia and expanded buying and testing Russian weapons .

Although it is difficult to predict what will happen in the future, one thing is certain that is no solutions are found for reconciliation, both sides will suffer. As documented by different reports, although France has been supplanted by China as Algeria’s leading source of imports, it retains second place with a 10.6% market share in 2020, behind China (16.8%). France is also Algeria’s second-largest export market and buys 13.3% of Algerian exports, behind Italy (14.7%), but ahead of Spain (10%) and China (5%) , which means that the continuation of tensions can cause irreparable damage to this country’s economy in the long run.

The diplomatic crisis between France and Algeria may lead to a series of scenarios that are not favorable for the region. The terrorist threat in the Sahel continues and France currently has between 5500 and 5700 troops in the five Saharan states. Despite assurances that military operations would continue, this tension may have effects military cooperation .

On the other hand, Algeria certainly does not intend to escalate tensions, as this would mean new hostilities amid the current chaos in North Africa, which would not be good for either country or the region as a whole. Therefore, there have been concerns towards the situation in Algeria as the country’s neighbors and the international community fear that any deteriorating situation in Algeria would increase regional instability, leading to the rise of the threat of more tensions .

References
Atalayar.com (2021). www.atalayar.com/en/content/algeria-france-crisis-macron-takes-step-towards-rapprochement-algiers
France24. (2022). Algeria’s 60 years of complex relations with former occupier France. www.france24.com/en/live-news/20220221-algeria-s-60-years-of-complex-relations-with-former-occupier-france
Iris-France.org (2019). Who rules Algeria right now? An analysis on the current state of state [power] and how it is changing after the ousting of President Bouteflika. www.iris-france.org/140130-who-rules-algeria-right-now-an-analysis-on-the-current-state-of-state-power-and-how-it-is-changing-after-the-ousting-of-president-bouteflika/
Mondediplo.com (2021). France and Algeria, a long history of distrust. www.mondediplo.com/2021/11/10algeria
TRT World. (2021). Why are tensions escalating between France and Algeria? www.trtworld.com/magazine/why-are-tensions-escalating-between-france-and-algeria-50475
Medialine. (2021). An Ongoing Crisis Between Algeria and France. www.themedialine.org/mideast-mindset/an-ongoing-crisis-between-algeria-and-france/

Some 3 billion people cannot afford healthy food, says UN
The Ceasefire Offers an Opportunity to Deal with the Humanitarian Disaster in Ethiopia
War in Ukraine aggravates food, financial and energy crises in Africa, says UN
ADH strongly condemns the violence in Darfur which has caused the death of 213 people and 13 others ...
Previous Article
War in Ukraine: More than half of Ukrainian children are displaced
Next Article
15 million people severely affected by drought in Kenya, Ethiopia and Somalia