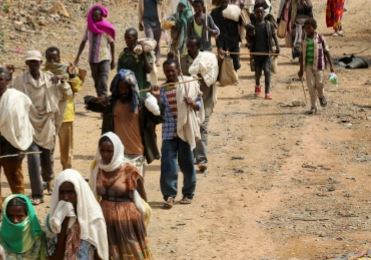 The agreement between the Ethiopian government and the Tigray People’s Liberation Front for a ceasefire in the war-torn Northern region has opened a window of hope to help the people who have been deprived of their most basic human rights since the beginning of the war. The most important issue in this agreement is to emphasize the rights of the people directly affected by this conflict. In this regard, two important steps can help improve the situation, including the delivery of humanitarian assistance for those suffering the most from the violence and reaching both a long-term agreement and a durable ceasefire, as the disputes have affected people’s homes, livelihoods, and identities.

The ceasefire agreed upon by both the government and the Tigray Defense Forces has provided an opportunity for humanitarian aid to the Northeast of the country to prevent mass starvation resulting from the 16 months-deadly war. Many civilians have lost their lives due to the blockade of food and other needs by security forces, leading to starvation and fatal diseases. Millions of civilians, including women and children, have been forced to flee their homes, experienced violence, and left without basic services. There have been also reports on the killings of aid workers while trying to distribute food and medications and prevent mass starvations and deaths, described by the W.H.O as the world’s worst health crisis. In January, the World Food Program reported that half of the pregnant and breastfeeding mothers in the Tigray region were malnourished and that 40% of Tigrayans were suffering from extreme lack of food.

As emphasized by the UN spokesperson, the conflict in Ethiopia has caused terrible suffering for millions of people across Afar, Amhara, Tigray, Benishangul Gumz, and Oromia, killing thousands of civilians, displacing millions across northern Ethiopia, and depriving the region of aid deliveries. Reports show that about 6 million people in Tigray have been thoroughly secluded from the outside world, and 5 million, including 500,000 children, urgently need food and humanitarian assistance. Despite the critical conditions, trucks of food aid have not been able to enter Tigray during the conflict, leaving the region to rely on the quantities delivered by air, while food provisions in Tigray, a primarily agricultural region, have been devastated by war. These conditions were worsened by systematic destruction of agricultural facilities in Tigray to use starvation as a weapon of war.

Hence, the Ethiopian government hopes that the proposed ceasefire can lead to substantial improvements in the humanitarian situation on the ground and pave the way for the resolution of the conflict in the Northern region with no more violence. The declaration of the ceasefire would present the best opportunity to end a conflict that has claimed the lives of thousands of people while also facing many with catastrophic human conditions and leading to mass displacements. On the other hand, it is hoped that this agreement could be the beginning of a revival of the war-torn economy, more severely deteriorated as western support for the federal government dried up because of the conflict .

However, reaching an agreement will require building confidence among the parties to the conflict through concrete and sustained steps. First of all, there is need to open humanitarian access to Tigray and Afar and let displaced people return under the control and supervision of political and military leaders. Mobilization of the humanitarian partners and resources also seems essential for a coordinated and concentrated effort . Overall, the path to peace is long in Ethiopia and requires comprehensive support by the international community in addition to the agreements and cooperation made by the warring parties.