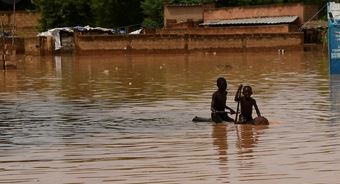 Niger is already going through a serious food crisis with more than 4.4 million people in « severe » food insecurity, i.e. 20% of the population. This poor country with an arid climate suffers from poor harvests to which are added recurrent terrorist violence, particularly against peasants.

The heavy rains that have been falling on Niger since June and the severe floods they cause have claimed 159 lives and more than 225,000 victims. According to figures from the Civil Protection services communicated to AFP on Monday, 159 deaths were recorded, 121 in the collapse of houses and 38 by drowning. Some 185 people were injured and 225,539 people affected, we learned from the same source. In addition the meteorological services announce new « heavy rains » until the end of September.

The rains totally destroyed or damaged more than 25,900 homes, 71 classrooms, six health care centers and 210 cereal granaries. Nearly 700 head of cattle were also decimated. Also, according to the Nigerien Ministry of Agriculture, bad weather has favored the appearance of insect « pests » of crops.

The rainy season – between June and September – regularly causes deaths in Niger, but compared to previous years the toll is heavier this year. According to health sources, the country is already going through a serious food crisis with more than 4.4 million people in « severe » food insecurity, i.e. 20% of the population.

Niger is a poor country with an arid climate which suffers from poor harvests to which are added recurrent jihadist violence, particularly against peasants.